Hi all sorry I've not been on line since 2015 I'm hoping to get back into this and keep posting new posts about the Channel Islands ringing scheme and my own sites as many of you are aware  in 2016
Alderney the third largest of the Channel Islands created the new Alderney bird observatory this year it was finally given its full accreditation as the 21st bird observatory within the British Isles since opening the observatory has managed to many thousands of birds and shown that Alderney is one of the major migration routes from bird migration not only into the UK but  Northern  Europe this makes Alderney
one of the most important migration route within the Channel Island.

With my own ringing in Guernsey over the last couple of years Spring migration has been this affair and this year has been no exception with a very late spring migration  a visit to the claire mare reed beds last night i only managed to hear one male reed warbler singing usually by this time there are several males singing within the reed bed yet there are still quite a good number of Sand Martins going through  as we usually record our last ones going through by the end of April On the last spring tide in April beginning of May I took a trip across to lihou island to check on the cormorants that nest on Lihoumel this year out of the 22 nests there is only three which hatching's the rest was still  sitting on eggs at the same time last year I was struggling to keep the young cormorants from scrambling over the rocks  I estimate that they are about 10 to 14 days later than what they were last year this is another indication of a very late spring
Posted by Unknown at 01:04 No comments:


A good start on Sunday at my ringing site at Jerbourg with two nets open 18 metre and a 12 m I started cutting and clearing some more of the net rides but gave up after the first round with a good number of birds in the netting area and with good numbers of swallows migrating through and swooping round the nets after insects . I ended up with a total of 54 new birds which included 9 Black Caps 2 Firecrest 1 house sparrow 1  chiffchaff  41  swallows a good number with only two nets open and only given a pass for three hours by the boss indoors had to get home to look after the kids . So she could go to work going to have to get this sorted?
Posted by Unknown at 06:07 No comments:


With eight weeks of ringing at the Claire Mare reedbeds over it is now time to move the nets to Jerboug for the rest of the autumn ringing season though sedge warbler's were in quite good numbers this year I noticed a higher percentage of adults too juvenile reed warbler's were very disappointing with numbers declining each year it is a worrying trend nearly all the reed warbler's that were caught were possibly migrants migration back South as I only ring 3 that I coded 3J so it makes me wonder whether we're going to lose reed warbler as a breeding species at this reed bed . We really do need to look at what is going on . Best of birds caught at the Clair Mare was aquatic warbler melodious warbler and two kingfishers. Fingers crossed for the weather to be kind to me this year at Jerboug as the last couple years has been washout with the weather.


With a poor start to the spring ringing season it did not get much better with clear nights most migrants passed straight overhead though we did managed to catch and ring some migrants as always spring is very hit and miss  in Guernsey the best bird of spring migration was a golden oriel a new ringing tick for me I did spend a couple of days in Alderney at the latter end of spring migration one interesting part was one evening catching swallows on the migration North I managed to catch  several juvenile swallows it was too early for these to be from the local breeding population I believe that these birds are from breeding swallows in southern Europe and joining up with swallows migrating north. In May  we started the seabird season  starting with   a week at our local tip with the North Thames Gull group this is something that we have been doing for several years now organised by Paul varon who's been doing a colouring project with our local breeding population of gull for several years the target species being lesser black backed gulls though we colouring all gull species which has been a great success with so much more being learnt about the movement of gulls and is now giving us a greater understanding of these great birds and their life the general seabird ringing this year it was quite a good season though we did not manage to get out as much as I would like to do we managed to colouring a good sample of greater cormorants and the small sample of shags with the shags showing a better breeding season than last year in July a small group of us went up to Burhou for two nights of ringing storm petrels again this trip proved to be a great success with 389 new birds ring and a total of 114 re-traps 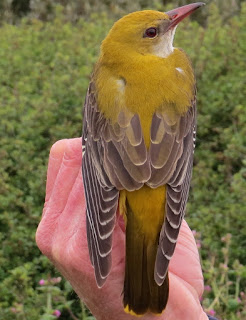 After a long mild winter , I was hoping that the spring migration would be somewhat better, but with clear nights . A lot of our migration is going overhead with only a scattering of birds making landfall though it seems migration has been very slow this year with birds being held up in Africa and southern Europe due to weather conditions. We can only hope that the next couple weeks get better . It has been that slow that I'm not even tried for swallows of an evening I was hoping to get up to Alderney this weekend with the winds all week being a light force 1 to 2 and from the south the south-east but as always the forecast changes to the weekend with northerly winds predicted 5 to 6 will have to cancel my trip fingers crossed for next weekend but hey no a more cheerful note we did manage today to get up to the humps with the help of  the Guernsey Sea fisheries, who took a team of four of us to Godin, we left St Peter Port harbour at about 8.50 and headed to the humps on the way up . We passed jethou and Herm
we managed to count at least 18 puffins on the water. As we got closer to the humps. There is also a good number of guillemots rafting nearby. After about 20 min. We held just of Godin on the Leopard S the sea fisheries boat while they launched the rip myself. Paul Catherine and Vic were put ashore once ashore, we had a small discussion on how to approach the cormorants as this some of the chicks were quite big, it was decided that we would take one nest at a time and and tried to round the bigger chicks back towards the nests. This seem to work well as we approach each nest and with keeping the birds tight to each other. We would place a blanket over four or five birds. This is the first time we have used this method and it definitely helps keep the birds calm while I metal ring and Paul putting the colour rings on. We moved slowly through the nesting site keeping a tight ring round the birds as yet I do not have the exact number of birds that we managed to ring as Catherine was taking the ring numbers and the colouring as myself and Paul rung the birds Vic had brought some slate and some broken patio slabs with him so that we could try to give the common terms chicks somewhere to hide and give them some protection from the gulls after last year. Fingers crossed they return
Posted by Unknown at 09:14 No comments:

Once again it's been a mixed autumn migration with a good start to the early part of migration at the reed bed with good numbers of reed warbler  and sedge warblers rung  I moved the nets to my ringing site at Jerbourg for the last two weeks of September and the first two weeks of October were showing promising signs of a good autumn migration with good numbers of black cap chiffchaff willow warblers grasshopper warblers and many other migrants but once again the weather turned against me with hardly anything rung down towards the end of October and the first week of November I have managed to get out for a couple of hours over the last three weeks I have managed to catch and ring, a few birds mainly blackbirds song thrush and my first redwing of the year today hoping tomorrow will be a better day . But with the weather still being quite mild . We have not seen a big  movement of winter thrushes yet there was a good number of finches in the field today, but with quite a strong breeze and bright sunshine at times they were not playing ball  number of birds rung in October for the last five years in  2010 /84 birds were rung  2011/ 91 birds rung 2012 /132 birds rung 2013/30 birds rung in 2013 . The weather turned bad early with heavy rain and strong winds I only managed to ring twice that year and did not go back until the spring 2014/127 birds rung

After eight weeks in the reed bed at the Clare Mare we took the nets down on the 07/09/14 since I took over ringing at the reed bed from Jamie. This year has been my best so far. Sedge warbler this year are well up. With 297 new birds being rung with over 70% of them being juvenile birds, reed warbler are slightly up as well this year, along with willow warbler after having four aquatic warbler in 2013. It was a bit disappointing only catching one this year, but never mind  always  next year. Over the last five years sedge and reed have been up and down in numbers showing that weather conditions play an important part to the success in the rearing and success of breeding birds .In 2010 being a reasonable spring and summer. We managed to ring 141 sedge warbler and147 reed warbler, 2011 rung 169 sedge warbler 81 reed warbler, In 2012, with a very cold and wet spring and summer sedge warbler's and reed warbler were well down with only 63, Sedge and 71 reed warbler being rung with that conditions in 2013 being better sedge and reed warbler were up. with 190 sedge reed 115 rung 2014 has been an excellent year with 297.sedge Rung and 103 reed warbler being rung it seems to me that reed warbler are still struggling as reed warbler used to outnumber sedge warbler. On 14 September. I moved back to my ringing site up at Jerbourg,after the disappointment of last year with constant winds this year has proven to be a good year specially for Black Caps and grasshopper warbler. On 2 October, I caught a black cap a controlled bird that had a Museum of Brussels ring on it.